The Month of Mozilla : Learning, Teaching and Experiencing the OpenWeb

To make things less confusing, lets start from the beginning. It all started back in mid-2013 when my twitter stream and facebook newsfeed was filled with status-es like “It’s official, you’re invited! Yay!” and there in my mailbox was an unread email with the same subject. Yes, It was official and I was invited too :D. It was an invitation to attend the Mozilla Summit 2013 to be hosted simulatneously in 3 cities (Brussels, Toronto and Santa-Clara) and with the mission for (almost) all mozillians to come together, get inspired, talk and shape the future of the open web. 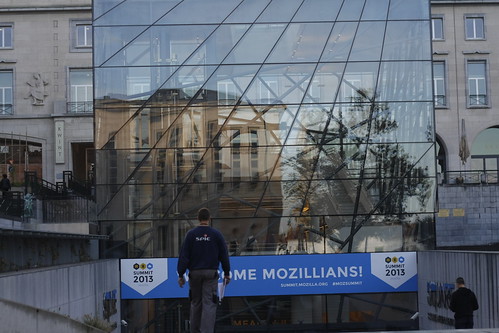 Fast forward to October 2013, after a flight from Munich via Amsterdam, I was standing in front of the Brussles airport, there were the amazing summit volunteers waiting to greet mozillians and make sure we reach the right hotel. I checked into the hotel, went to the square to grab dinner/snacks and the awesome goodie bag. Next stop was the Delirium Cafe (also known for having the guiness world record for the most variety of beer in 2004) where i met a lot of awesome mozillians.

Over the next couple(+1) of days i attended sessions related to privacy on the web (where we discussed about ghostery and collusion- now knows as Lightbeam), using the developer tools to debug other XUL based applications (especially thunderbird), Mozilla Reps program, MDN, OpenBadges, having a million mozillians. One thing that i liked about each session is that it was a two way session and it included more discussions and less of one way communication.

Other than the sessions, I think the world fair and the innovation fair were the two awesome places to be in the summit as it gave one an opportunity to see how spread we are as mozillians and how awesome we are too. 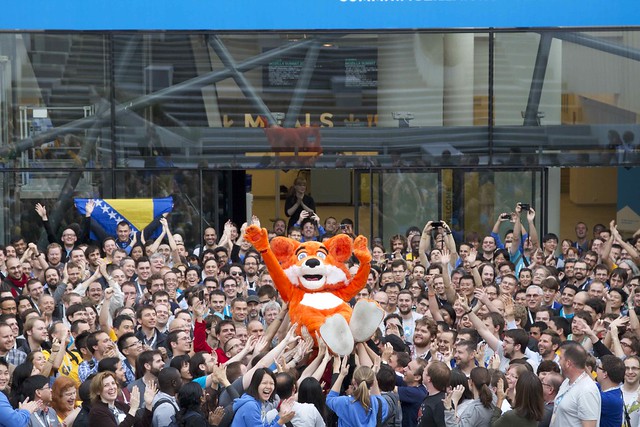 Well, you attended an event - AWESOME, but what you take away from the event decides how successful it was and how it would help you in the coming days. Here’s what i got to takeaway. - Getting to know some of the faces behing the IRC nicks, turns out i couldnt’ meet all the faces - Meeting the mozillians from Europe. I would like to give a special shout out to Axel Grude (the awesome AMO guru), Raivis (The Latvian mozillian, localizer, webdev, awesome!), Rimas (localizer, techie from Lithuania) and Sjmur (Mozilla ireland community manager). - A week after the summit and i had already helped Axel test(and find a bug too) one of his addon and made it to his contributor list. - Last but not the least, leaving with the motivation to do more and the feeling that your work is making a difference.

Another mail, another set of flights and here I am in London, Running to the Mozilla office directly from the airport to attend a reps meeting session regarding the Mozilla Festival. Oh, did i say that this was the biggest MozFest till date. This was quite a different event from other Mozilla events, because of the new set of audience and the new set of motivation. The Mozilla Festival is all about building and hacking, as they say (F*ck it, Ship it). 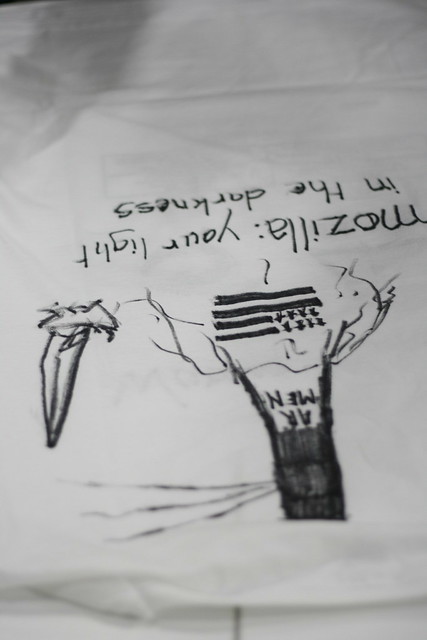 The first day of the event officially started with the science fair at the evening, leaving us (as facilitators) a whole day to get an idea of the flow of the event and our role in it. Me and Prashish were part a of the scrum led by Kat and Laura, where we had a wall full of problems and an army of awesome-scurm-leads (More on the scrum later). Then we had the hack-your-tshirt session where we hacked our tshirts with spray paint and sketch-pens. The event had a mega version of it with paints and what not (more on that later). Then, kicked off the real deal of the day, the Science festival. There were some awesome projects, experiments and products being displayed but i would like to give a special mention to goolabs (for their awesome work with 3d on the web), Erase all kittens(for how awesome+weird+different their approach to teaching and gaming is) and the tactile web demo from the Mozilla Japan team (believe me they were awesome)

The Day 2 kicked off with the keynotes and then moving to the track they belonged to. I first went to the #teachTheWeb track, as we were part of that track. There was a beautiful wall of tasks waiting to be in the making and be made eventually :D . Then i went to the openbadges section to hack on some custom badges and badges of the future. While browsing other badges i was way inspired by the “Holy Badge of Hacks”. Then came the most important and happening event of the day, the Maker-Party. I am so glad that i didnt miss it, because the aurora and the spirit at the maker party was amazing (more than that). People working on stop-motion-videos, children learning to code, people making games using scratch, making (the so sweet)kumi dolls, and a lot more (there were so many things happening that i might have forgot some). That was most of the first day which ended with some awesome conversations with Henrik, Jan, Prashishh, Michael and Leo over the course of Japanese food.

I think the biggest takeaway from this event was how important learning is and how big a role the teacher/teaching method plays in the process. I personally learned a variety of different ways people were using to teach webmaking and moreover dozens of ways people were using the web to make things. Again, a big shout out to all the Mozilla Reps (you all are awesome), It was a great pleasure meeting each one of you.

Thanking them who deserve

Well, I wanted to especially thank the Mozilla Nepal community (especially Avash for taking the lead initially), and the people behind the first Mozilla South Asian Meetup, where i got to meet all the community leaders (especially Deb, who is my mentor too) who eventually guided me and helped me to contribute.